Home Features A “Goofy” New Way of Animating a “Goof” 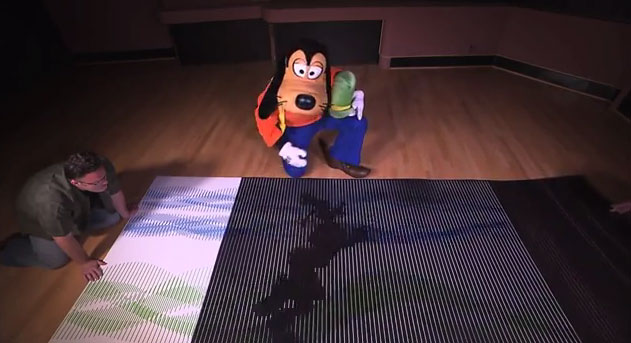 The Disney Parks have shared how the Walt Disney Company is always trying different ways of showcasing their famous animated characters.  A technique of animation involves persistence of vision, a phenomenon where you retain a visual for a small amount of time, even after the visual is removed from view. (An example would be the flip books we played with when we were kids.)

Another way of animating repetitive motion is by printing a series of images on a flat surface and then sliding an overlay with vertical stripes over it.  This type of animation, which also utilizes persistence of vision, is featured in a popular series of books.  These books feature a variety of animated objects including horses, soccer players, penguins and even Star Wars characters.

When our pal Goofy heard about this, he wanted to get in on the fun.  And of course, everything Goofy does has to be a big production.  So, with a dash of Disney magic, a giant “Goofymation” shoot took place inside one of the stages at Disney’s Hollywood Studios.  Here’s a 30-second look at the results.