Here’s everything you need to know:

Avengers Campus to Open in 2020 at Disney California Adventure Park

You can soon suit up alongside your favorite Super Heroes at the Avengers Campus, beginning in 2020 at Disney California Adventure park. This campus is set up by the Avengers to recruit the next generation of Super Heroes.

“In some ways, these new campuses are like the Avengers themselves: a group of diverse individuals who have teamed up for the same purpose,” said Scot Drake, Creative Executive, Marvel Global Portfolio, Walt Disney Imagineering. “This collection of unique addresses—each dedicated to a different discipline—have been brought together to champion the next generation of heroes.”

The first key address at the Avengers Campus will be the Worldwide Engineering Brigade – also known as “WEB” – which will house our new Spider-Man experience, the first Disney ride-through attraction to feature this iconic Super Hero.

During an open house at WEB, the aspiring inventors are excited to invite you for a test drive of their latest invention: the “Web Slinger” vehicle, which allows you to sling webs just like Spider-Man! The attraction gives you a taste of what it’s like to have actual super powers as you help Spider-Man collect Spider-Bots that have run amok.

Avengers Campus will also feature Pym Test Kitchen. Just as Ant-Man and The Wasp use “Pym Particles” to grow and shrink just about anything, Pym Technologies is using the latest innovations to grow and shrink food at this eatery!

You will also find heroic encounters throughout the campus, including Black Widow, Ant-Man and The Wasp, Doctor Strange, the Guardians of the Galaxy, Super Heroes from Wakanda and Asgard, and Iron Man.

As Super Heroes continue to assemble at the campus, one of its iconic buildings will be the Avengers Headquarters where you may catch a glimpse of the Avengers along its rooftops.

This building, which will open in phase two, will become the future entrance to a brand-new E-Ticket attraction where you will step on board a Quinjet and fly alongside the Avengers in an epic adventure to Wakanda and beyond! You will team up alongside the Avengers in a battle to save our world against one of the most powerful villains they have ever faced. Imagineers are hard at work conceiving an all-new innovative ride system to put you in the middle of this action.

Celebrating awe-inspiring moments of magic—both large and small—that are at the heart of so many Disney stories, “Magic Happens” reminds us we don’t need wings to fly, shooting stars were made to wish upon, and magic doesn’t stop at midnight.

This daytime spectacular will feature stunning floats, beautiful costumes, and beloved Disney characters – all led by Mickey Mouse and his pals.

On her voyager wa‘a (or canoe), Moana journeys forth on the crest of a beautiful wave, inspired by beautiful koa wood carvings inset with LED panels, providing a dazzling glimpse into the magic the ocean holds.

Celebrating the magic that happens when Miguel strums the guitar of Ernesto de la Cruz, the spectacular float inspired by the Disney and Pixar film “Coco” bridges the Land of the Living and the Land of the Dead with vibrant marigolds. Fantastical alebrije spirit animals join the procession, along with Miguel’s dog Danté.

The regal grand finale of “Magic Happens” parade celebrates magical moments from classic Disney stories, including the trio of fairies from “Sleeping Beauty” who transform Princess Aurora’s gown from pink to blue and back again!

In addition, the parade will feature ​even more floats and characters, an energetic musical score and a new song produced in partnership with singer-songwriter Todrick Hall. The high-energy music combines this original song with classic Disney tunes in a fresh, contemporary style.

The action takes place at the El CapiTOON Theater in Mickey’s Toontown, where Mickey and Minnie are premiering their newest short, “Perfect Picnic.” Before you enter the cinema, you’ll experience a special exhibit created by the Toontown Hysterical Society featuring costumes and props from the toon world.

Mickey & Minnie’s Runaway Railway puts you inside the wacky and unpredictable world of Disney Channel’s Emmy® Award-winning “Mickey Mouse” cartoon shorts! Once you step into the cartoon world of Mickey and Minnie, you’ll board a train with Goofy as the engineer. Then, one magical moment after the next leads you to a zany, out-of-control adventure filled with surprising twists and turns. 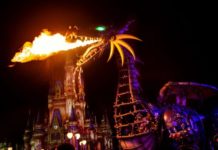 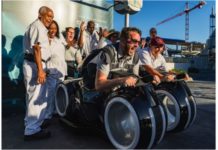