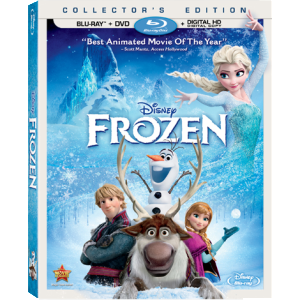 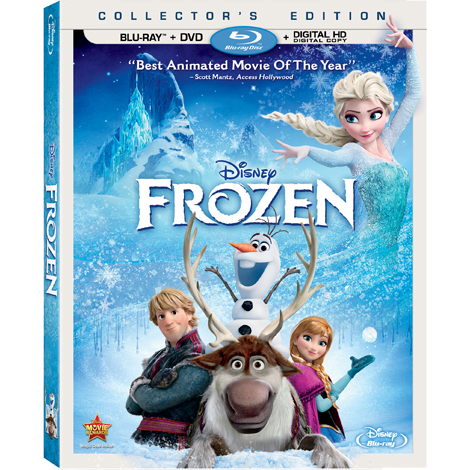 From start to finish, “frozen” is jam packed with entertainment, musical mastery and highlights of emotion.  The story of 2 royal sisters (Anna and Elsa) kept apart from each other during their childhood, due to Elsa’s frigid secret.  The emotions build as Anna and the citizens of Arendelle discover what Elsa has been hiding.  What follows is an adventure filled with wonderful characters including Sven a loyal reindeer and Olaf an adorably lovable snowman.  Love prevails as the 2 sisters discover the warmth in their hearts and melt away what was once an icy barrier between them.

Watching “frozen” on Blu-ray was delightful.  The animations jumps from the screen with bright colors and flawless picture presence.  The sound is clear and booming as each song pulls you further into the story.  There is nothing missed from the big screen to your living room when it comes to clarity and audio.

Disney has not released a 3D copy as of yet (no word why), but the Blu-ray does hold its own.

The “Frozen” Blu-ray does come with some entertaining bonus Extras including “The Making of Frozen” and D’frosted: Disney’s Journey from Hans Christian Anderson to Frozen”.  Music videos by Demi Lovato and Martina Stoessel are a nice bonus, but is really meant for a limited audience.  A personal favorite is the Micky Mouse Short “Get a Horse”!

Overall the release was well worth the wait and is worth the purchase for not only Disney fans, but musical lovers as well.  Disney finally made it’s way back to it’s roots, concentrating on a musical score to drive the film forward.