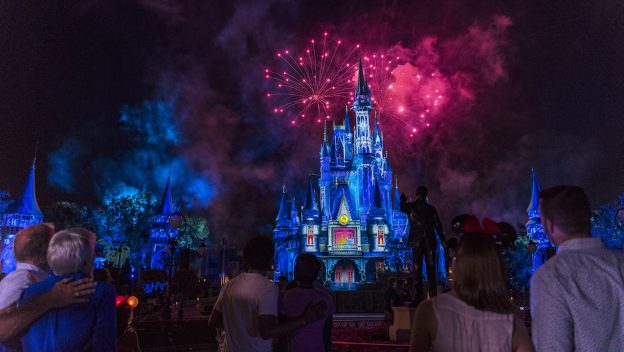 For many guests who visit the Walt Disney World Resort, an unforgettable highlight of their Disney vacation is enjoying one of our amazing nighttime spectaculars or other entertainment offerings side-by-side with their family and friends.

And there are so many options for thrilling nighttime fun around the Walt Disney World Resort! From the splendour of “Happily Ever After” at Magic Kingdom Park to the beauty of nature celebrated in “Rivers of Light,” there’s truly an experience that appeals to every Disney fan.

Here’s a listing of nighttime spectaculars and other evening offerings you can enjoy throughout the summer at the Walt Disney World Resort.

MAGIC KINGDOM PARK
“Happily Ever After” – This 18-minute spectacular captures the heart, humor and heroism of many of your favorite Disney Characters and encourages you to find your “Happily Ever After.” It features moments from classic Disney films such as “The Little Mermaid” and “Aladdin,” plus modern favorites like “Moana” and “Zootopia.” Cinderella Castle serves as the backdrop of the show, with dazzling projections bringing heartfelt Disney stories to life on, around and above the iconic 18-story-tall castle. 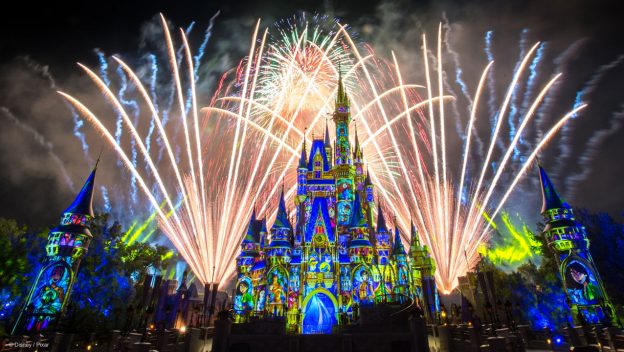 “Once Upon A Time” Castle Projection Show – This colorful projection show, hosted by Mrs. Potts and her son Chip from “Beauty and the Beast,” shares a captivating bedtime story that recounts cherished moments from favorite Disney films, including “Cinderella,” “Peter Pan,” “Frozen” and more.

EPCOT
“IllumiNations: Reflections of Earth” – This stunning spectacular combines lasers, leaping flames and fireworks, all synchronized to a symphonic score in a show that brings Epcot’s World Showcase Lagoon to life at night. The show celebrates the spirit of humanity in three acts: The Earth is Born, The Triumph of Life and Hope for the Future, while a spinning globe helps narrate this lovely story with visuals that depict the history of humanity and the achievements of our time.

DISNEY’S HOLLYWOOD STUDIOS
“Star Wars: A Galactic Spectacular” – This fireworks spectacular features state-of-the-art projection effects, dynamic lighting, lasers and pyrotechnics that light up the night like never before. The music, magic and characters of Star Wars combine with special effects and fireworks to put you inside iconic scenes from the Star Wars saga, including a new action sequence from “Solo: A Star Wars Story” that was added into the spectacular just a few weeks ago.

“Disney Movie Magic” – This projection show uses the Chinese Theatre as a backdrop for colorful projections of footage from Disney’s greatest films, including the Indiana Jones and the Pirates of the Caribbean movie series.

Tree of Life Awakenings – After the sun sets at the park, the wondrous animals carved into the Tree of Life’s trunk awaken. Every 10 minutes, a new story from the animal kingdom is told through a visually stunning display of vivid color and animated imagery – right on the Tree of Life.

Kilimanjaro Safaris (at Night!) – Explore the sights of the savanna at Disney’s Animal Kingdom like never before with an evening safari journey that gives you a look at the nocturnal habits of the reserve’s many animal residents, including lions, elephants, hippopotamuses and hyena.

Pandora – The World of Avatar at Night – This land, which is lovely by day, transforms into an eye-catching bioluminescence paradise at night. Take a thrilling journey through one of the land’s two attractions – Avatar Flight of Passage or Na’vi River Journey – or stop into the Windtraders merchandise shop for items that also glow.

DISNEY’S TYPHOON LAGOON
Disney H2O Glow Nights – With glowing beach balls and other lighting effects,, Disney H2O Glow Nights is a rare opportunity for guests to experience Typhoon Lagoon under the moonlight. On select nights beginning June 21, Typhoon Lagoon will become a luminous, nighttime hotspot that features a DJ Dance Party on the beach, special character meetings with Buzz, Woody and Jessie from Disney·Pixar’s “Toy Story,” unique F&B and use of all attractions at the water park – with minimal wait times.

DISNEY SPRINGS
Shopping, Dining & Entertainment at Disney Springs – There’s a plethora of nighttime fun to be had at Disney Springs, with so many shops to explore and mouth-watering restaurants to try – not to mention the outdoor entertainment. Swing by The Edison, a lavish gothic-industrial hotspot, to enjoy live music, cabaret dancers and breathtaking aerialists; enter Forbidden Lounge, a perfect spot for late-night dining and incredible libations, discretely located atop Morimoto Asia; or kick up your heels at Raglan Road, an authentic pub transplanted straight out of Dublin, where step dancers perform on table tops and hearty brews and robust fare delight your taste buds.

Ready to plan your next visit? Be sure to check out My Disney Experience to view park hours, explore dining options, make FastPass+ reservations and more.