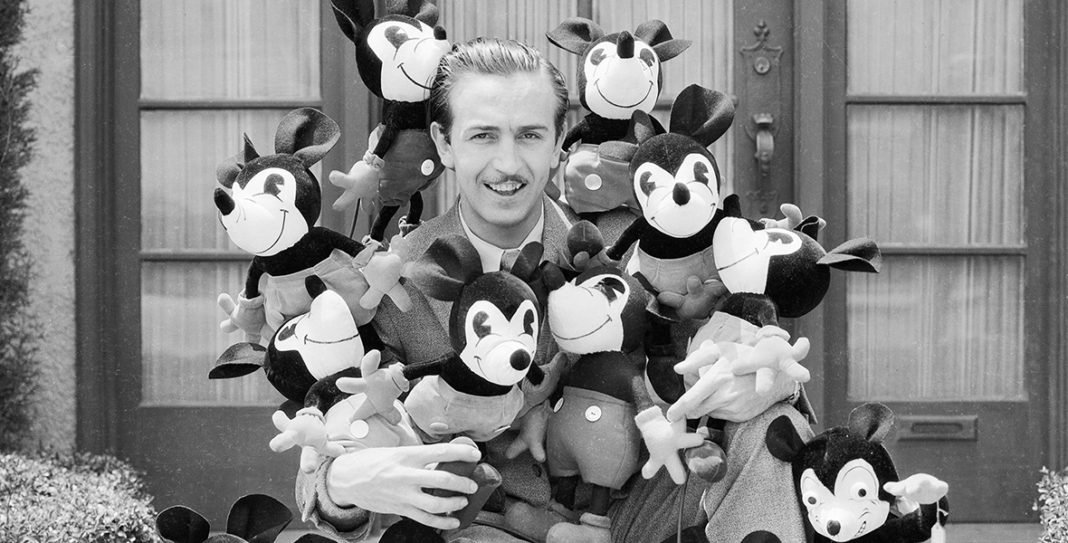 During a 43-year Hollywood career, which spanned the development of the motion picture medium as a modern American art, Walter Elias Disney, a modern Aesop, established himself and his product as a genuine part of Americana.

David Low, the late British political cartoonist, called Disney “the most significant figure in graphic arts since Leonardo.” A pioneer and innovator, and the possessor of one of the most fertile imaginations the world has ever known, Walt Disney, along with members of his staff, received more than 950 honors and citations from throughout the world, including 48 Academy Awards® and 7 Emmys® in his lifetime.

Walt Disney’s personal awards included honorary degrees from Harvard, Yale, the University of Southern California, and UCLA; the Presidential Medal of Freedom; France’s Legion of Honor and Officer d’Academie decorations; Thailand’s Order of the Crown; Brazil’s Order of the Southern Cross; Mexico’s Order of the Aztec Eagle; and the Showman of the World Award from the National Association of Theatre Owners.

The creator of Mickey Mouse and founder of Disneyland and Walt Disney World was born in Chicago, Illinois, on December 5, 1901. His father, Elias Disney, was an Irish-Canadian. His mother, Flora Call Disney, was of German-American descent. Walt was one of five children, four boys and a girl.

Raised on a farm near Marceline, Missouri, Walt early became interested in drawing, selling his first sketches to neighbors when he was only seven years old. At McKinley High School in Chicago, Disney divided his attention between drawing and photography, contributing both to the school paper. At night he attended the Academy of Fine Arts.

During the fall of 1918, Disney attempted to enlist for military service. Rejected because he was only 16 years of age, Walt joined the Red Cross and was sent overseas, where he spent a year driving an ambulance and chauffeuring Red Cross officials. His ambulance was covered from stem to stern, not with stock camouflage, but with drawings and cartoons.

After the war, Walt returned to Kansas City, where he began his career as an advertising cartoonist. Here, in 1920, he created and marketed his first original animated cartoons, and later perfected a new method for combining live-action and animation.

In August of 1923, Walt Disney left Kansas City for Hollywood with nothing but a few drawing materials, $40 in his pocket and a completed animated and live-action film. Walt’s brother Roy O. Disney was already in California, with an immense amount of sympathy and encouragement, and $250. Pooling their resources, they borrowed an additional $500 and constructed a camera stand in their uncle’s garage. Soon, they received an order from New York for the first “Alice Comedy” short, and the brothers began their production operation in the rear of a Hollywood real estate office two blocks away.

On July 13, 1925, Walt married one of his first employees, Lillian Bounds, in Lewiston, Idaho. They were blessed with two daughters — Diane, married to Ron Miller, former president and chief executive officer of Walt Disney Productions; and Sharon Disney Lund, formerly a member of Disney’s Board of Directors. The Millers have seven children and Mrs. Lund had three. Mrs. Lund passed away in 1993.

Mickey Mouse was created in 1928, and his talents were first used in a silent cartoon entitled Plane Crazy. However, before the cartoon could be released, sound burst upon the motion picture screen. Thus Mickey made his screen debut in Steamboat Willie, the world’s first fully synchronized sound cartoon, which premiered at the Colony Theatre in New York on November 18, 1928.

Walt’s drive to perfect the art of animation was endless. Technicolor® was introduced to animation during the production of his “Silly Symphonies.” In 1932, the film entitled Flowers and Trees won Walt the first of his 32 personal Academy Awards®. In 1937, he released The Old Mill, the first short subject to utilize the multiplane camera technique.

On December 21 of that same year, Snow White and the Seven Dwarfs, the first full-length animated musical feature, premiered at the Carthay Circle Theatre in Los Angeles. Produced at the unheard of cost of $1,499,000 during the depths of the Great Depression, the film is still accounted as one of the great feats and imperishable monuments of the motion picture industry. During the next five years, Walt completed such other full-length animated classics as Pinocchio, Fantasia, Dumbo and Bambi.

In 1940, construction was completed on Disney’s Burbank studio, and the staff swelled to more than 1,000 artists, animators, story men and technicians. During World War II, 94 percent of the Disney facilities were engaged in special government work including the production of training and propaganda films for the armed services, as well as health films which are still shown throughout the world by the U.S. State Department. The remainder of his efforts were devoted to the production of comedy short subjects, deemed highly essential to civilian and military morale.

Disney’s 1945 feature, the musical The Three Caballeros, combined live action with the cartoon medium, a process he used successfully in such other features as Song of the South and the highly acclaimed Mary Poppins. In all, 81 features were released by the studio during his lifetime.

Walt’s inquisitive mind and keen sense for education through entertainment resulted in the award-winning “True-Life Adventure” series. Through such films as The Living Desert, The Vanishing Prairie, The African Lionand White Wilderness, Disney brought fascinating insights into the world of wild animals and taught the importance of conserving our nation’s outdoor heritage.

Disneyland, launched in 1955 as a fabulous $17 million Magic Kingdom, soon increased its investment tenfold and entertained, by its fourth decade, more than 400 million people, including presidents, kings and queens and royalty from all over the globe.

A pioneer in the field of television programming, Disney began production in 1954, and was among the first to present full-color programming with his Wonderful World of Color in 1961. The Mickey Mouse Club and Zorro were popular favorites in the 1950s.

But that was only the beginning. In 1965, Walt Disney turned his attention toward the problem of improving the quality of urban life in America. He personally directed the design on an Experimental Prototype Community of Tomorrow, or EPCOT, planned as a living showcase for the creativity of American industry.

Said Disney, “I don’t believe there is a challenge anywhere in the world that is more important to people everywhere than finding the solution to the problems of our cities. But where do we begin? Well, we’re convinced we must start with the public need. And the need is not just for curing the old ills of old cities. We think the need is for starting from scratch on virgin land and building a community that will become a prototype for the future.”

Thus, Disney directed the purchase of 43 square miles of virgin land — twice the size of Manhattan Island — in the center of the state of Florida. Here, he master planned a whole new Disney world of entertainment to include a new amusement theme park, motel-hotel resort vacation center and his Experimental Prototype Community of Tomorrow. After more than seven years of master planning and preparation, including 52 months of actual construction, Walt Disney World opened to the public as scheduled on October 1, 1971. Epcot Center opened on October 1, 1982.

Prior to his death on December 15, 1966, Walt Disney took a deep interest in the establishment of California Institute of the Arts, a college level, professional school of all the creative and performing arts. Of Cal Arts, Walt once said, “It’s the principal thing I hope to leave when I move on to greener pastures. If I can help provide a place to develop the talent of the future, I think I will have accomplished something.”

California Institute of the Arts was founded in 1961 with the amalgamation of two schools, the Los Angeles Conservatory of Music and Chouinard Art Institute. The campus is located in the city of Valencia, 32 miles northeast of downtown Los Angeles. Walt Disney conceived the new school as a place where all the performing and creative arts would be taught under one roof in a “community of the arts” as a completely new approach to professional arts training.

Walt Disney is a legend, a folk hero of the 20th century. His worldwide popularity was based upon the ideas which his name represents: imagination, optimism and self-made success in the American tradition. Walt Disney did more to touch the hearts, minds and emotions of millions of Americans than any other man in the past century. Through his work, he brought joy, happiness and a universal means of communication to the people of every nation. Certainly, our world shall know but one Walt Disney.

Please follow PASSPORT TO THE PARKS for more great stories and fun!