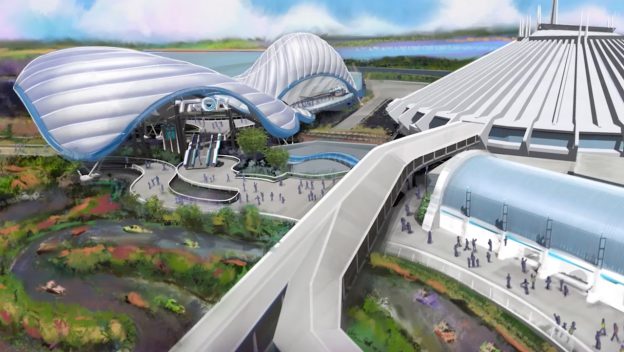 Disney recently celebrated another major construction milestone for the much-anticipated TRON attraction coming to Magic Kingdom Park at the Walt Disney World Resort.  After nearly a year of foundation work the new attraction is finally going vertical as the first steel support columns have been installed!

Similar to the Guardians of the Galaxy attraction at Epcot, Disney recently worked through the night to pour the concrete foundation that will now support this much anticipated coaster.

These steel columns will serve as the framework that’ll support the coaster’s track in Tomorrowland.  Disney released a wonderful special look a special look at the progress being made by Walt Disney Imagineers, Disney cast members and project teams.

Based on the guest-favorite attraction TRON Lightcycle Power Run at Shanghai Disneyland, this new Tron attraction will allow riders to board a train of two-wheeled Lightcycles for a thrilling race through the digital frontier.

What an honor it must have been for these Disney cast members to continue a Disney tradition by signing their names on one of the first steel support columns for the new attraction.

The TRON attraction is set to open at Magic Kingdom Park in time for Walt Disney World’s 50th anniversary in 2021.