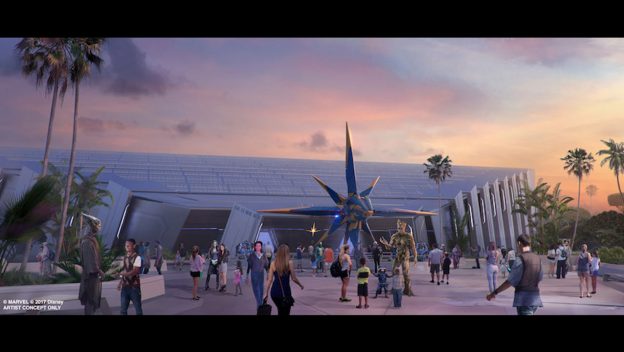 Today we have an exciting update to share with you from Future World at Epcot.

Earlier this week, 960 trucks’ worth of concrete was poured to create the foundation of what will soon take shape as Epcot’s mammoth “Guardians of the Galaxy”-themed attraction. The attraction is on track to become one of the world’s longest enclosed coasters, and to house it, a new facility is being built adjacent to the existing Universe of Energy building.

Inspired by the films, the “Guardians of the Galaxy”-themed attraction will expand on the original vision of Epcot’s Future World, with an epic storyline being developed by Walt Disney Imagineering in close collaboration with the original filmmakers.

Take a behind-the-scenes look at the construction progress!

Guests can catch “Guardians of the Galaxy – Awesome Mix Live!” five times a day from June 9 through August 19.