The Disney Skyliner is the newest form of transportation coming to Walt Disney World.  The skyliner is a gondola style vehicle system suspended in the air by cables, crossing over multiple towers locate throughout Disney property.

The Disney Skyliner will provide access to Disney’s Hollywood Studios and Epcot.  It will carry guests to and from selected resorts, including Disney’s Art of Animation, Disney’s Pop Century, Disney’s Caribbean Beach and Disney’s Riviera Resort (currently under construction).

There has been a tremendous amount of progress since my last Disney Skyliner update in July.  New towers are in place and the skyliner stations are all taking shape.  Let’s take a look at each resort and theme park.

Check out all the Disney Skyliner Pictures here.

This station sits on Hourglass Lake between the two resorts and was the last to go vertical.  The foundation is all under water, so it took a long time to make sure it was structurally sound.  Now, we can finally see the station and what it will look like. 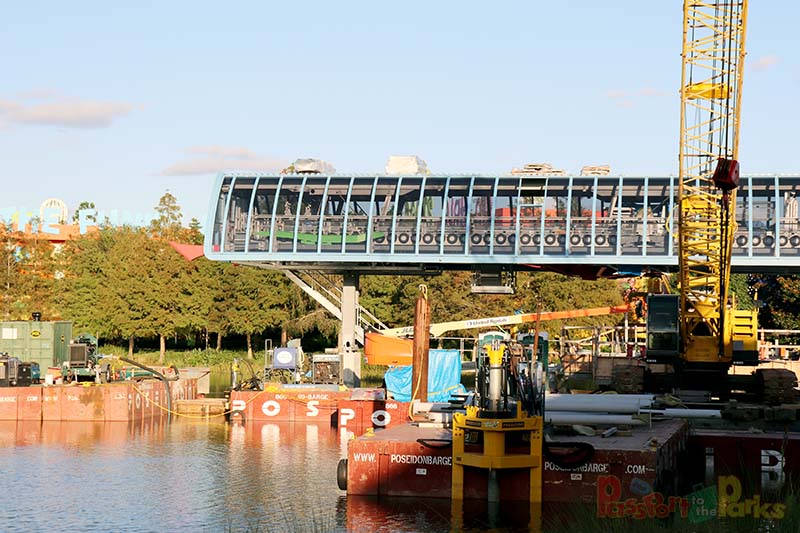 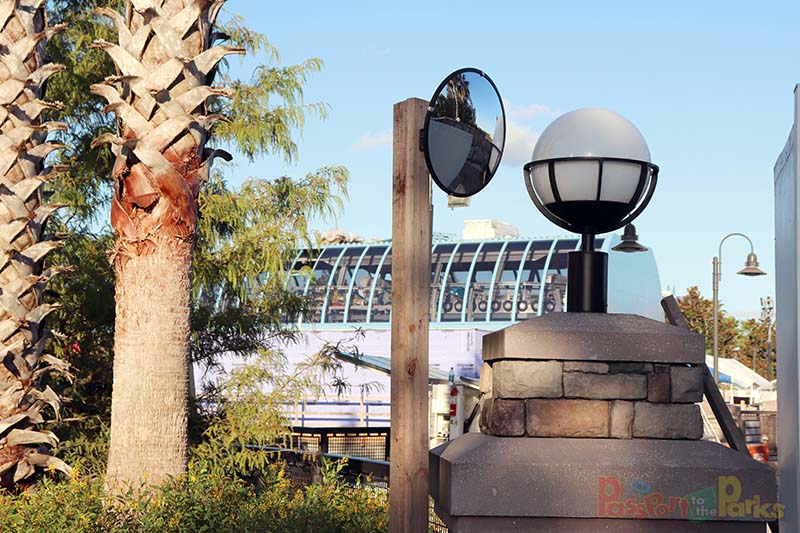 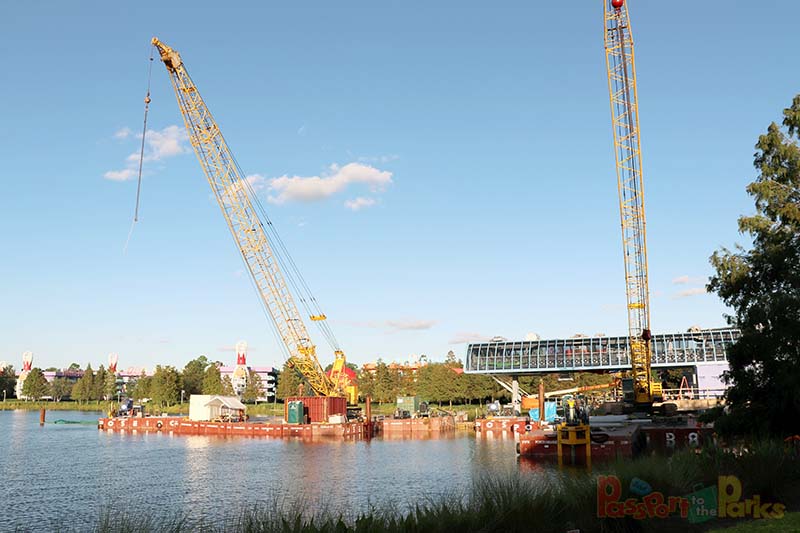 Towers will eventually be placed on Hourglass lake taking guests up and over the water towards Disney’s Caribbean Beach Resort. 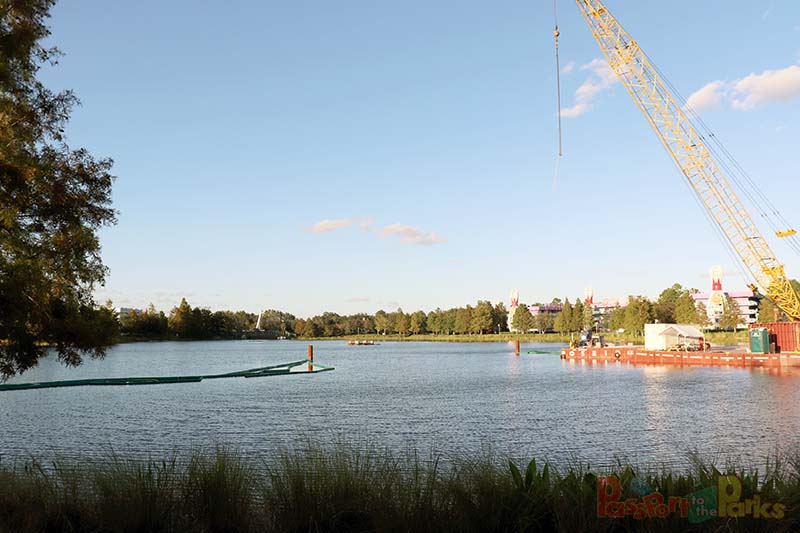 The largest of all the Disney’s Skyliner stations, it three access points leading north, south and west.  To the south is Disney’s Art of Animation and Pop Century Resorts.  To the North is the Riviera Resort with continuing service to Epcot.  Finally, heading out to the west will take you into Disney’s Hollywood Studios. 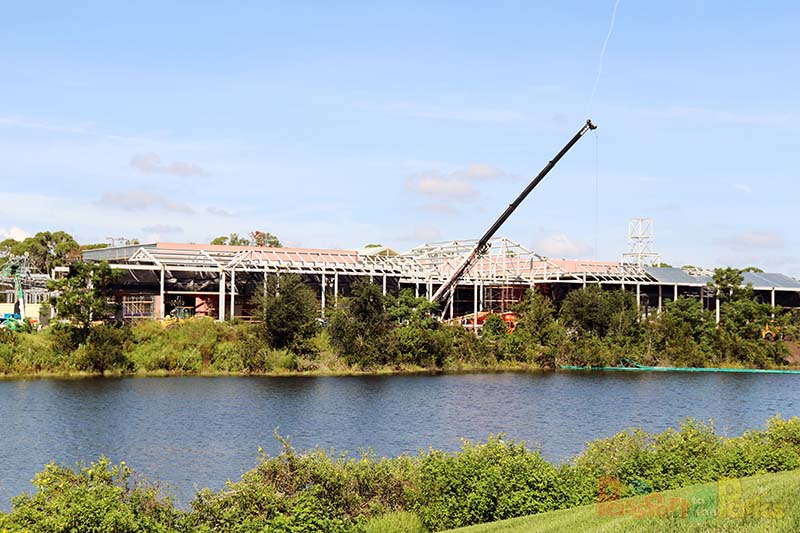 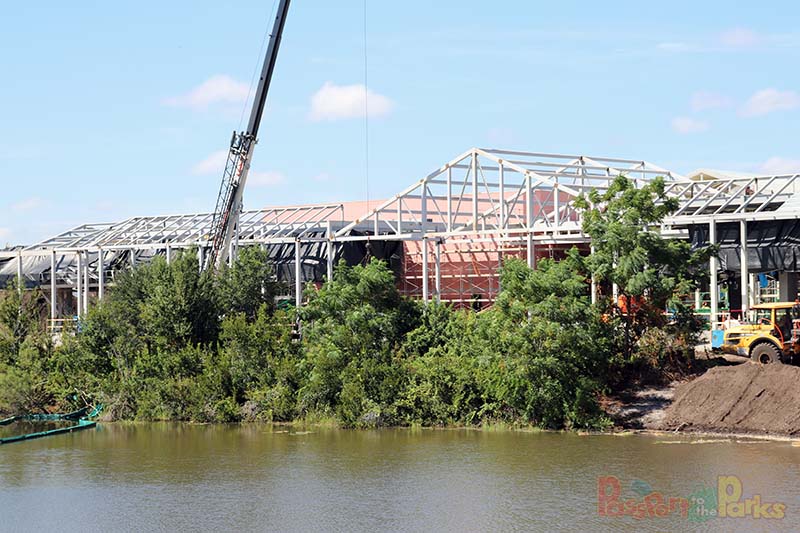 This massive station will provide storage for the gondola vehicles and serve as secure maintenance area. 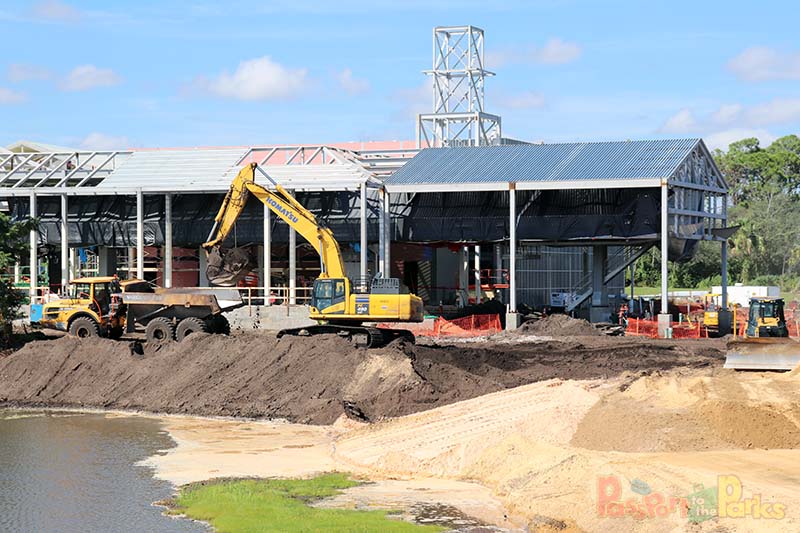 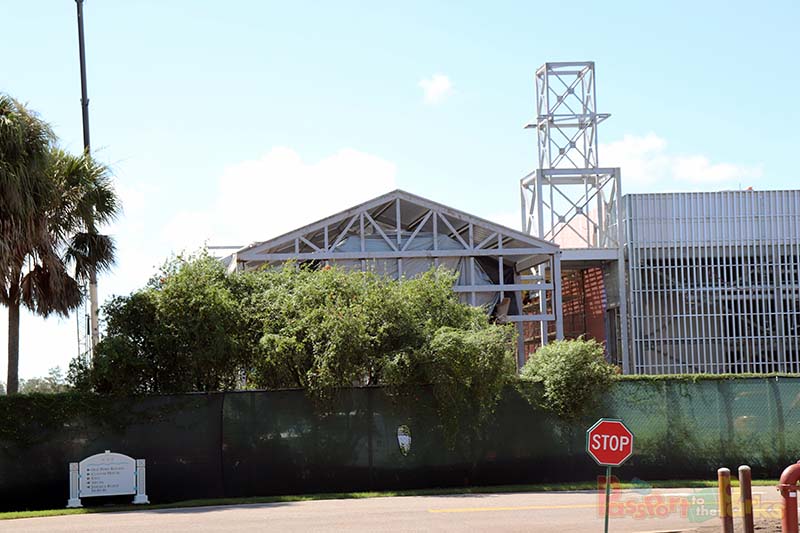 Here is one of the primary towers coming out of the Caribbean Beach station through the resort towards Disney’s Riviera. 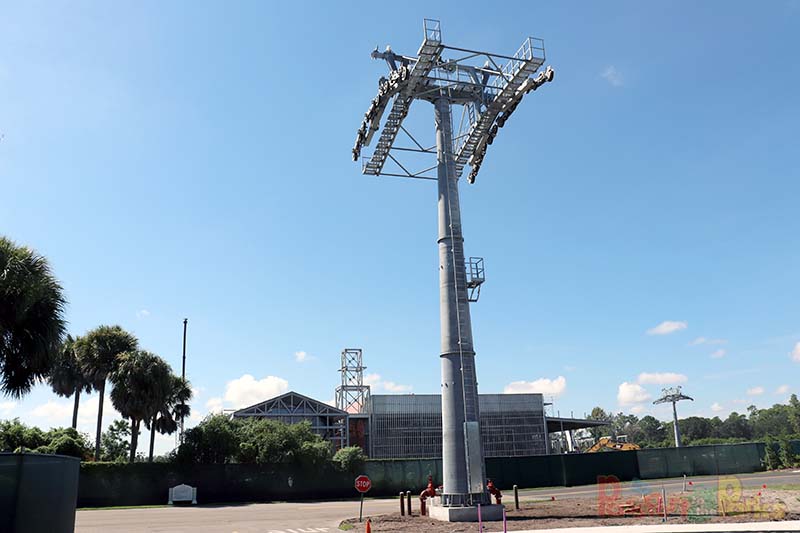 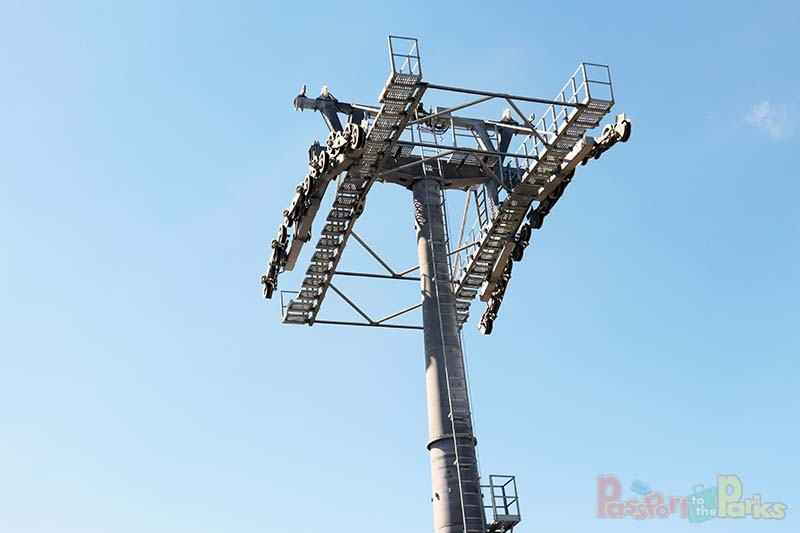 Just outside of Aruba and on the very north end of Disney’s Caribbean Beach, we find Disney’s Riviera Resort under construction.  This station will allow the 90 degree turn necessary to head towards Epcot. 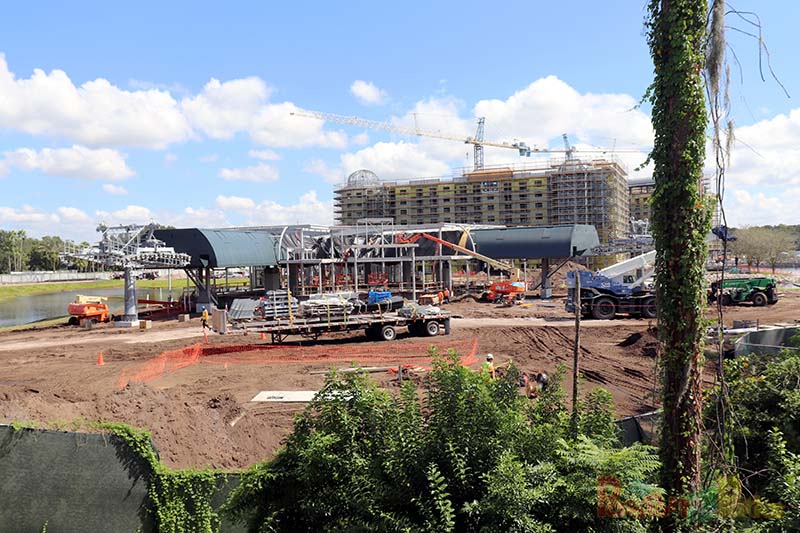 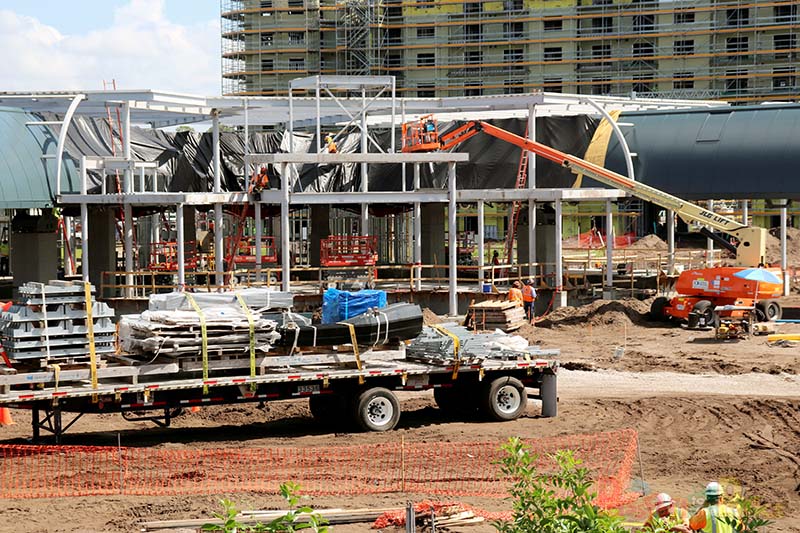 The skyliner will make its way down Buena Vista Boulevard and into the parking lot at Disney’s Boardwalk.  Here we find another 90 degree turn leading us through the parking area and eventually into the International Gateway at Epcot. 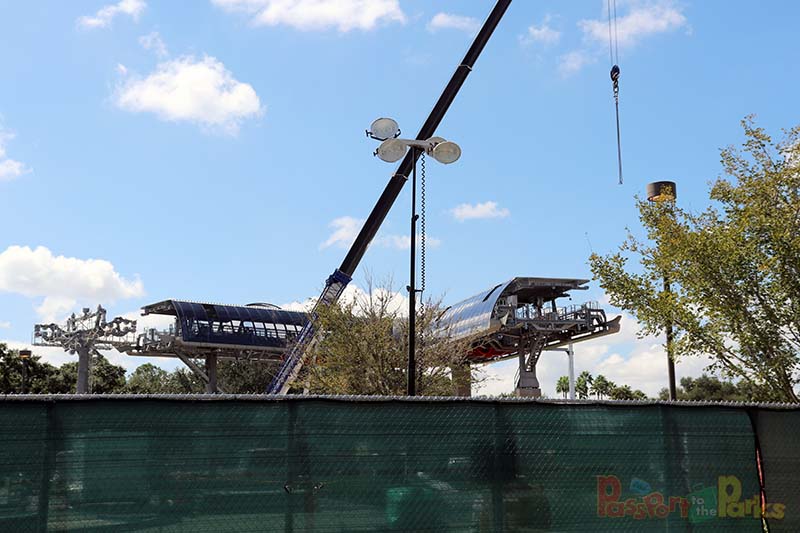 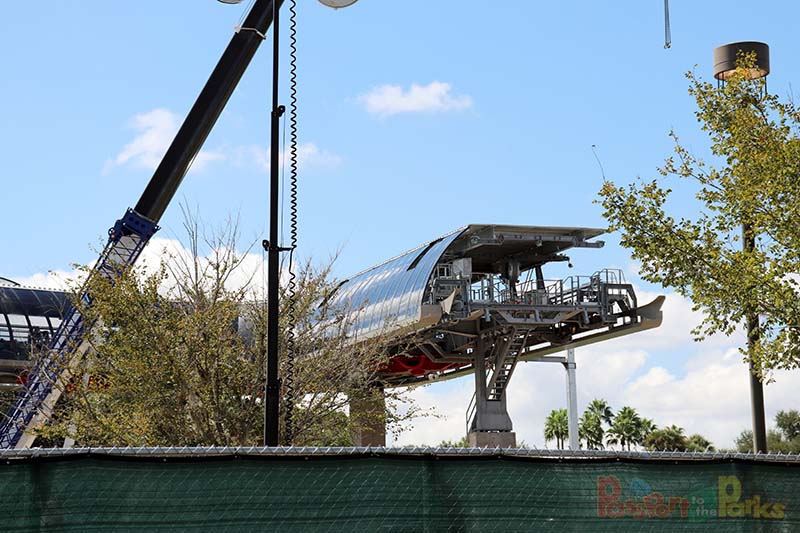 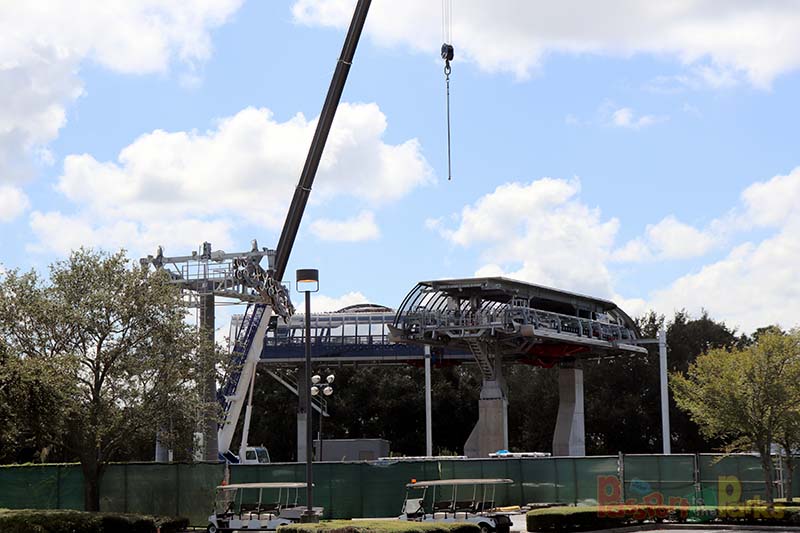 The Skyliner will bring guests into the rear entrance at Epcot between France and the United Kingdom, otherwise known as the International Gateway.  The gondolas will travel over the boat dock and into the station.  This is going to increase guest traffic at this entrance, so security and ticketing will be expanded to accommodate the influx. 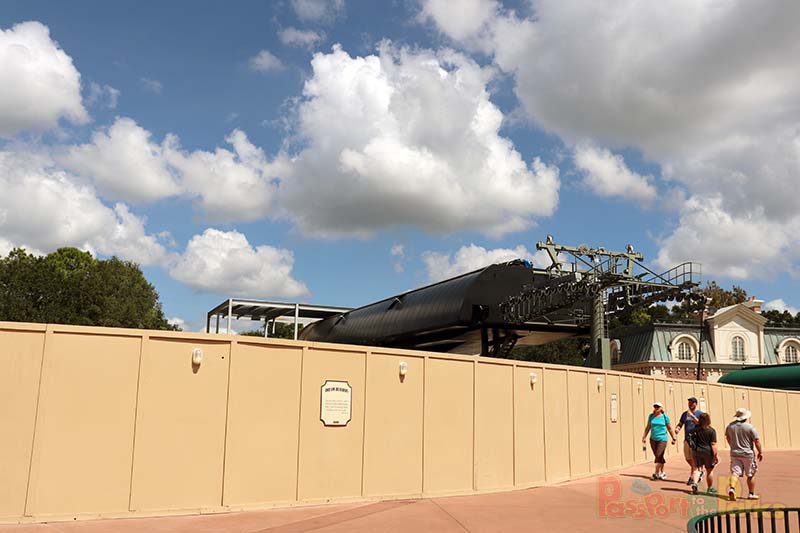 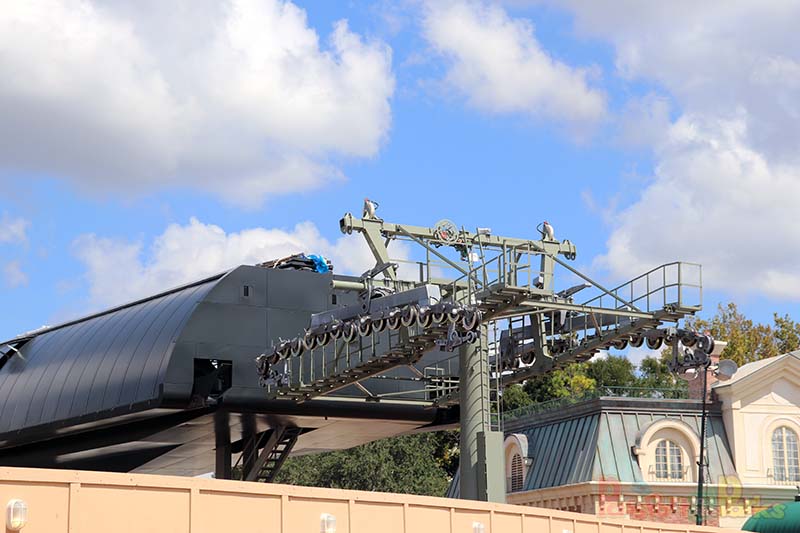 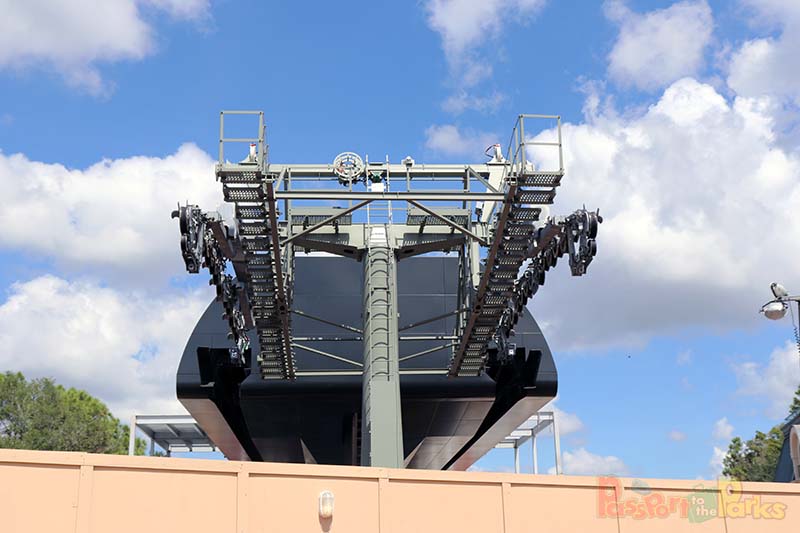 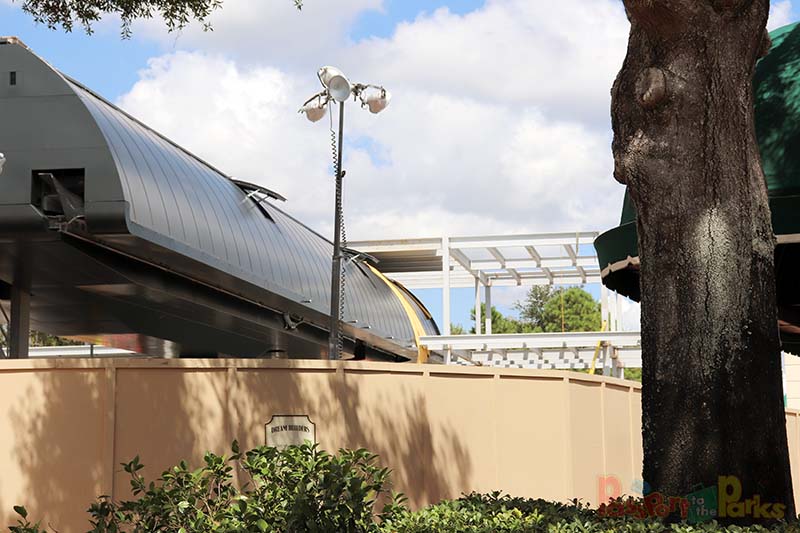 The towers leading in from the Boardwalk parking lot and over the boat dock. 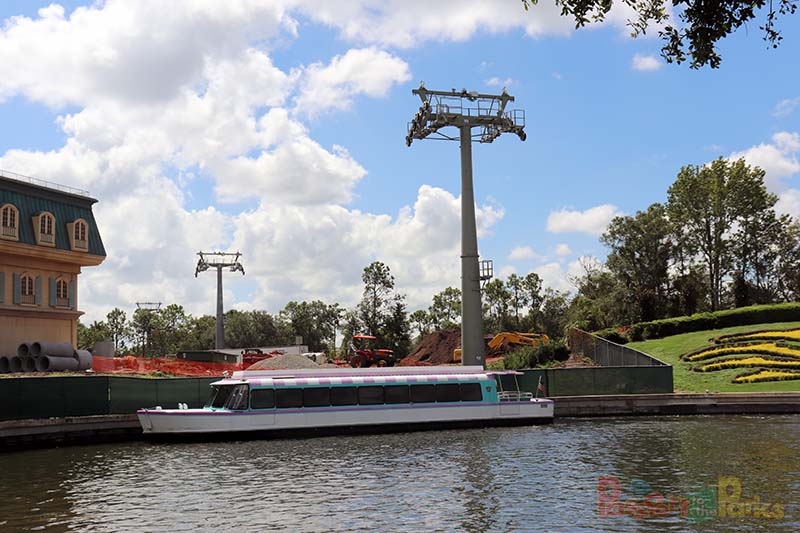 There is so much happening at Hollywood Studios, the skyliner seems like a a small fish in a sea of changes.  The entire front of the park is going through a complete overhaul.  A new main entrance is being constructed off Osceola Parkway.  It will lead into a massive new parking lot expansion.  New bus stations and tram stops are being built along with new security and check in points, but it’s the Disney Skyliner that truly dominates the landscape. 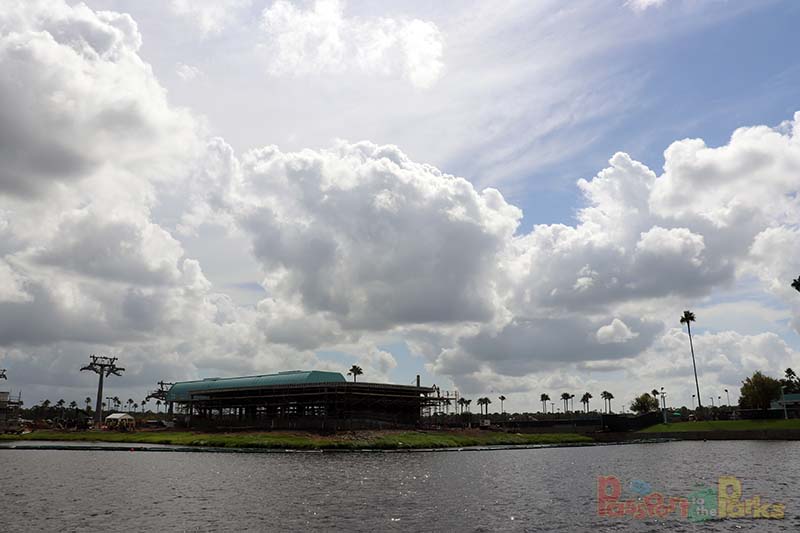 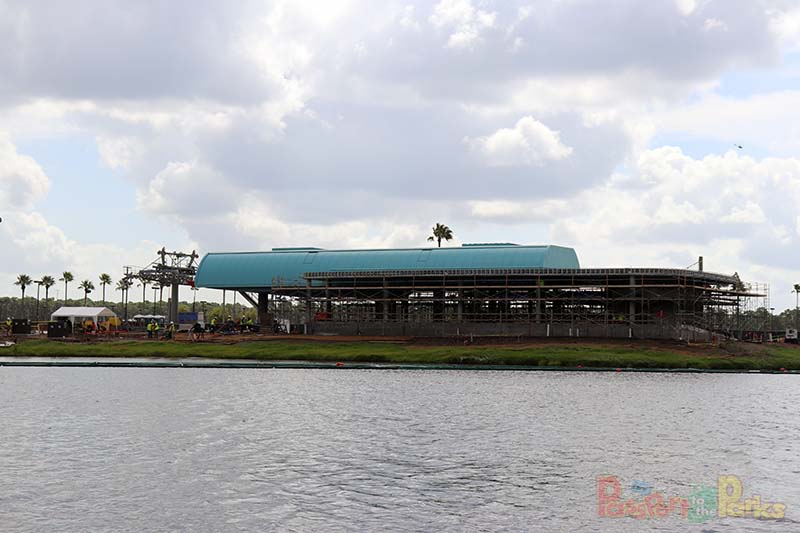 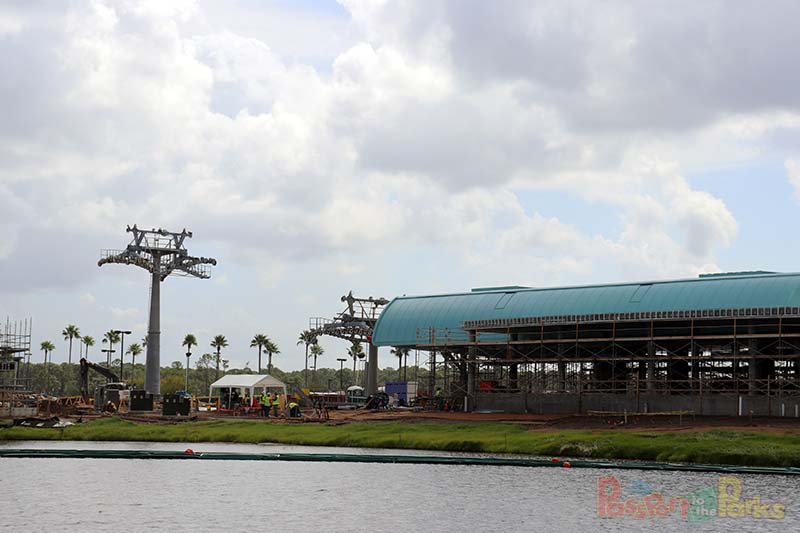 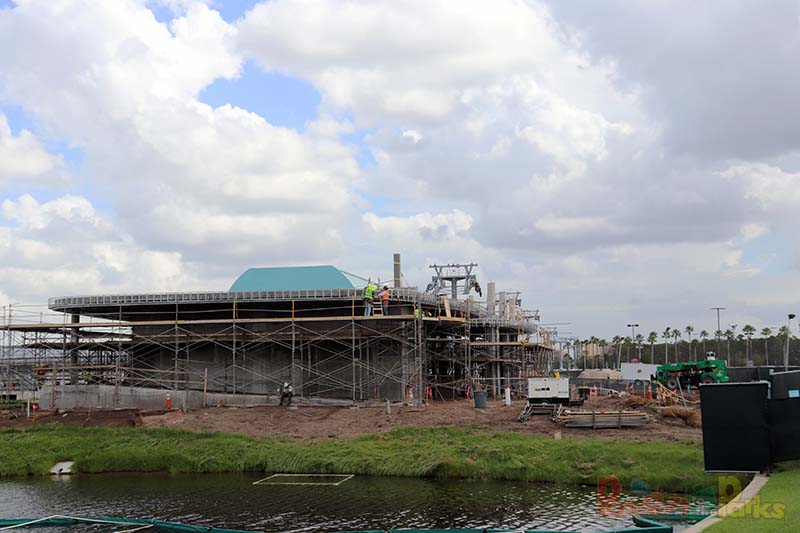 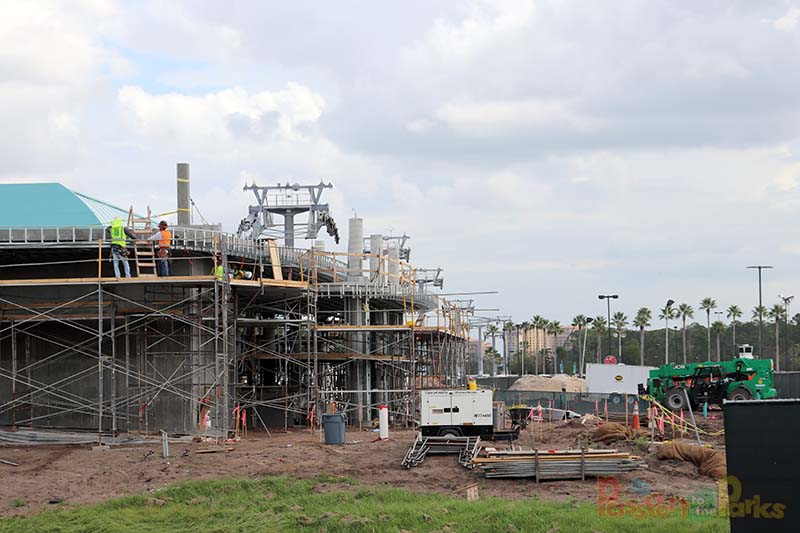 We can see the new bus stations under construction just to the left of the skyliner station. 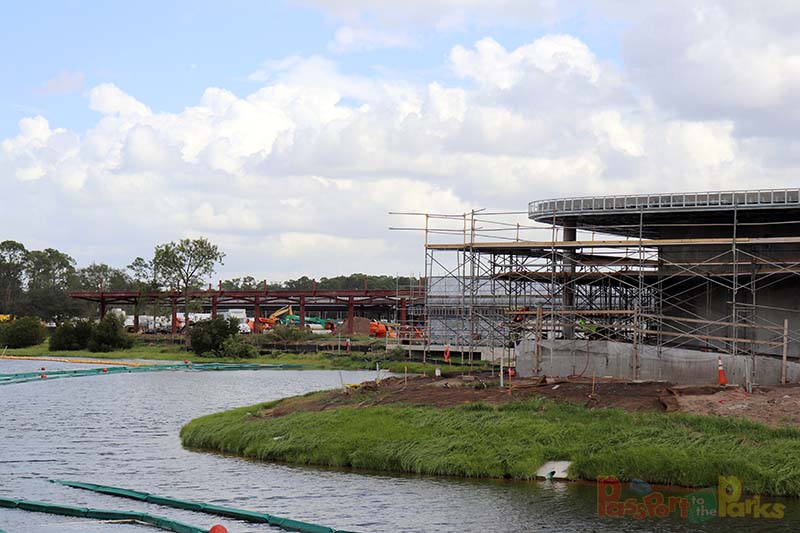 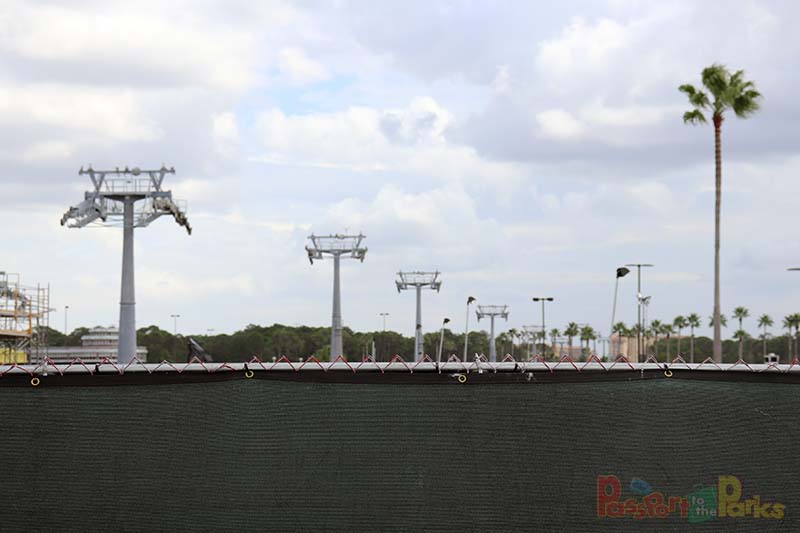 The skyliner is scheduled to open in 2019.  Speculation is spring or summer.  The ultimate goal is to be ready for the grand opening of Star Wars Galaxy’s Edge at Hollywood Studios.  The way they are moving along, I don’t see any issues with that timeline.  That may all change, once cables start going up.  Then we’ll see what real challenges may pop up.

Make sure to follow PASSPORT TO THE PARKS for future Disney Skyliner updates.